A Heated Pool Thanks to the Power Road® 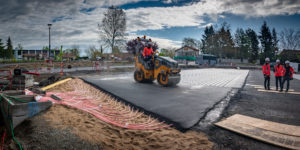 Since the launch of the Power Road® solution at the end of 2017, Eurovia has continued to deploy its positive energy road technology. It is this time in the Loire, in the town of Feurs (42) that a new Power Road® project has just been launched. On the occasion of the renovation of the city’s cinema parking lot, the community of Forez-Est, which manages the Forez Aquatic de Feurs pool, called on the Roanne agency to set up a renewable energy source to heat the facility.

The Power Road® solution is based on a solar thermal collector system (tubes through which a heat transfer fluid passes) integrated into the pavement. The solar radiation absorbed by the pavement is therefore recovered via the heat exchanger and can be stored (for later redistribution) or released immediately, as is the case for the Feurs swimming pool.

In addition to the two indoor pools, the equipment runs in the summer with a large 50-metre pool (2,345 m3) and another outdoor learning pool, both heated to a temperature of 28°. The installation of Power Road® by the Eurovia teams on 750 m² of cinema parking adjacent to the swimming pool thus makes it possible to contribute to the preheating of the renewed water for these pools and eliminate 16 tonnes of CO2 emissions per year with gas for the main gas system.